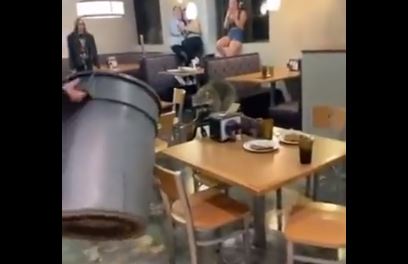 Students eating inside a dining hall at Louisiana State University had their meals suddenly interrupted by a raccoon that fell out of the ceiling and landed on their table.

Witnesses say everyone was enjoying a normal dinner when a section of the ceiling suddenly collapsed, along with the raccoon, which looked just as shocked. Students screamed as two maintenance workers tried, unsuccessfully, to capture the hungry animal which ran away and was on the loose inside the building. Animal control officers had to be called in and they eventually coaxed the raccoon out of the building. No one was hurt, but some meals were ruined. (LSU Reveille)

🦝 Raccoon on the loose!
A raccoon was seen dining in the 459 tonight during its hours of normal operation. TikTok user adrianne.bajon captured the video and shared it to the platform. See below: pic.twitter.com/kMbLSlQK0s