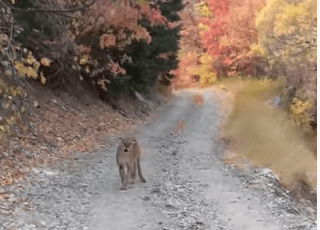 A video is going viral that shows a scary six-minute long encounter between a hiker and a mountain lion in Provo, Utah.

The video was uploaded to YouTube by 26-year-old Kyle Burgess, who said he was hiking in Provo’s Slate Canyon on Saturday (10/10) when he came across a cougar with her cubs.

The video starts with Burgess filming two cubs that were on the trail, when all of a sudden the cubs’ angry mother comes out of nowhere and starts chasing after him.

The expletive-laden video then shows Kyle backing down the trail as he tries to make loud noises to scare off the cougar, who charges and hisses at him several times during the ordeal.

After several terrifying minutes, Burgess was eventually able to throw a rock and scare the cougar off.

Kate Remsen, who works with the Living with Lions, tells CBS News that the mountain lion was not stalking Kyle, but was actually pushing him away from her cubs.

Remsen also said that encounters like this are rare, and Burgess was able to do many of the recommended things in that situation.