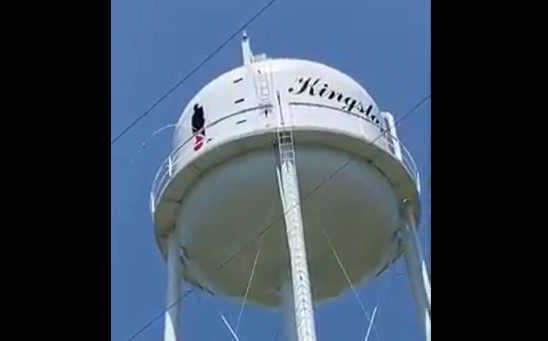 Police in Arkansas have arrested a man they said was behind the shooting of a water tower bearing a silhouette of country legend Johnny Cash.

As previously reported, the single bullet pierced the 50,000 gallon water tank and made it look like Johnny Cash was urinating. The dangerous stunt drew tons of laughs, but a crime is a crime and police arrested Timothy Sled and charged him with criminal mischief and impairing the operation of a vital public utility. Investigators say local surveillance footage led them to Sled and that he might have had an accomplice. Officials say the tank lost about 30,000 gallons of water per day and the cost to repair the bullet hole in the tank is about $5,00

Johnny Cash is taking a leak on his hometown of Kingsland, Arkansas.

A silhouette of the late “Man in Black” is painted on the side of the town’s water tower and a prankster with a gun thought it would be funny to shoot a single bullet into the silhouette’s crotch, causing a stream of water to leak out. As expected, social media has erupted in laughter. It’s unknown who fired the shot. The leak was first noticed last Wednesday and the town thinks it may take a week to repair it. The water office manager said, “People think it’s funny but a lot of hard work and effort went into getting the grant to get this painted. It’s sad that someone could do this.”

#JohnnyCash relieving himself from the Top of a water tower in #Arkansas pic.twitter.com/25CL8VKb4C