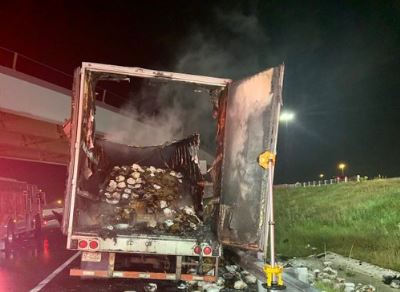 A truck driver in Florida is giving thanks that he is OK after his truck caught fire and burned all of the frozen turkeys he was hauling. The truck was driving on Interstate 4 near Sanford when it suddenly caught fire. The driver was able to pull off to the side of the road and get out before it became entirely engulfed in flamed. Firefighters arrive to put out the blaze, but not before 10,000 frozen turkeys were overcooked. The cause of the fire is unknown. Traffic was slowed on I-4 for several hours while crews cleaned up the mess.