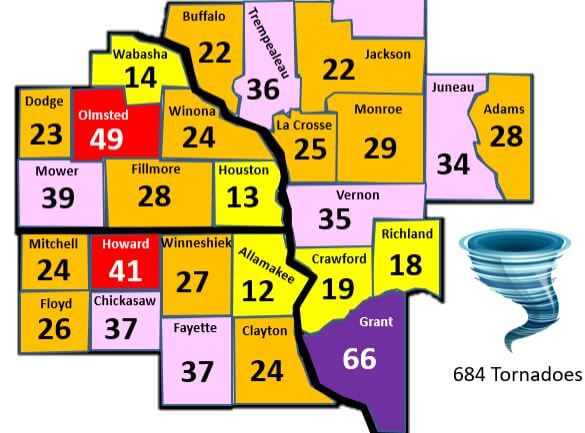 According to the National Weather Service in La Crosse, 684 tornadoes have impacted Northeast Iowa, Southeast Minnesota, and Western Wisconsin since 1850.

Here’s a breakdown by county, starting with Northeast Iowa:

The last reported tornado in Allamakee County was on May 8th, 2002 just Southeast of Waukon.  Here’s the report from NWS La Crosse.

Along highway 76, just southeast of Waukon, a farm was hit by a small tornado that damaged part of the house and at least one outbuilding. Shingles from other buildings were embedded around the base of the house, and mud was noted on the south side of the house even though most of the debris was blown to the east and southeast. A nearby church was also damaged by the same tornado.  In fact, a family who was had taken shelter inside the church reported a stain glass window was completely gone following the storm, with no broken glass found anywhere near the building.   The tornado caused an estimated $10,000 in property damage.

The last tornado reported in Winneshiek County was on September 9th, 2019.

A weak tornado touched down south of Ossian. The tornado moved northeast before dissipating southeast of Ossian. Several farm buildings and numerous trees were damaged along the path of the tornado. This tornado caused $60,000 in property damage.

The last report of a tornado in Fayette County happened on March 28th, 2020 when two touched down outside of Oelwein and Maynard.

The last report of a tornado in Clayton County happened on September 12, 2019 outside of Gunder and Monona.

A tornado touched down northwest of Farmersburg and moved northeast before dissipating southwest of Monona. Damage from the tornado was limited to some trees, a few outbuildings, and crops. One home did have some tree branches impaled through a wall. This tornaado caused $30,000 in property damage and $3,000 in crop damage.

For a full breakdown by county, check the database at NWS La Crosse.