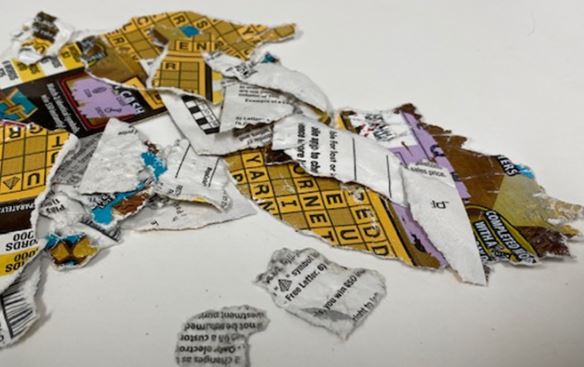 Oregon Lottery officials were able to reconstruct an $8 winning scratch-off ticket that was torn to shreds by the winners’ dogs. Lottery officials said they received a letter from Salem residents Nathan and Rachael Lamet explaining their $3 Pharaoh’s Gold Crossword ticket had been ripped to bits by Apple and Jack, their Alaska klee kai dogs. The letter included the torn-up ticket and a photo of the guilty canines. Lottery officials were able to piece the ticket back together and confirmed it was an $8 winner. The Lumets said they were shocked when officials replied to their letter and said a check would be mailed to them.

This winner story deserves a round of a-paws. A couple in Salem are celebrating an $8 win after their two Alaskan Klee Kias ate their Scratch-it. Our team was able to piece most of the ticket back together and confirm the $8 win. Full story: https://t.co/t5Lfj9YBzP pic.twitter.com/VDvheRkJP6