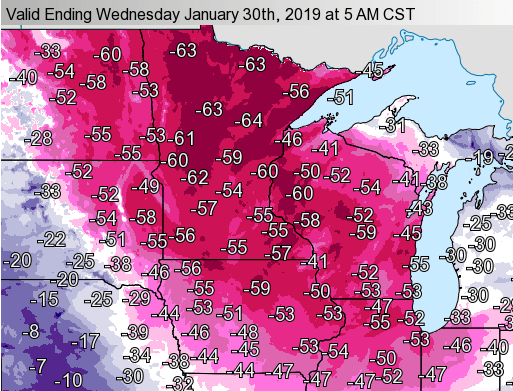 Walking to the station this morning it was a little cold…..not as cold as last year at this time. Not even close! The National Weather Service looks back at the dangerous cold at the end of January 2019.

“A dangerously cold arctic air mass settled across the Upper Mississippi River Valley for the end of January 2019, in the wake of a winter storm that brought several inches of snow a day earlier.

The record-breaking cold (coldest since 1996) moved in Monday afternoon (the 28th), with the temperatures dropping below zero by early evening. Temperatures would not climb above zero (0 deg F) until later Friday morning (Feb 1st) – one of the longest stretches of sub-zero temperatures on record.

What made this air more dangerous, to deadly, was the addition of strong, gusty winds. Northwest winds were on the increase by early morning on the 29th (Tuesday), blowing from 15 to 25 mph with gusts upwards of 40 through that day. Wind chills from -30 to -60 F resulted. Winds would diminish a bit Wednesday (30th), eventually becoming light that night.

Low temperatures bottomed out around 30 below for most Wednesday morning. Even colder readings were observed Thursday morning as clear skies and light winds allowed temperatures to fall to -40 or colder in some areas.

Most schools closed through the week, first for the snow storm on Monday, then for the dangerous cold Tuesday through Thursday. A state of emergency was declared for Wednesday, Jan.30th by the Wisconsin Governor resulting in many businesses being closed and suspension of postal services. Tragically, the cold also resulted in some loss of life.”

Take a look at the dangerous wind chills from a year ago.