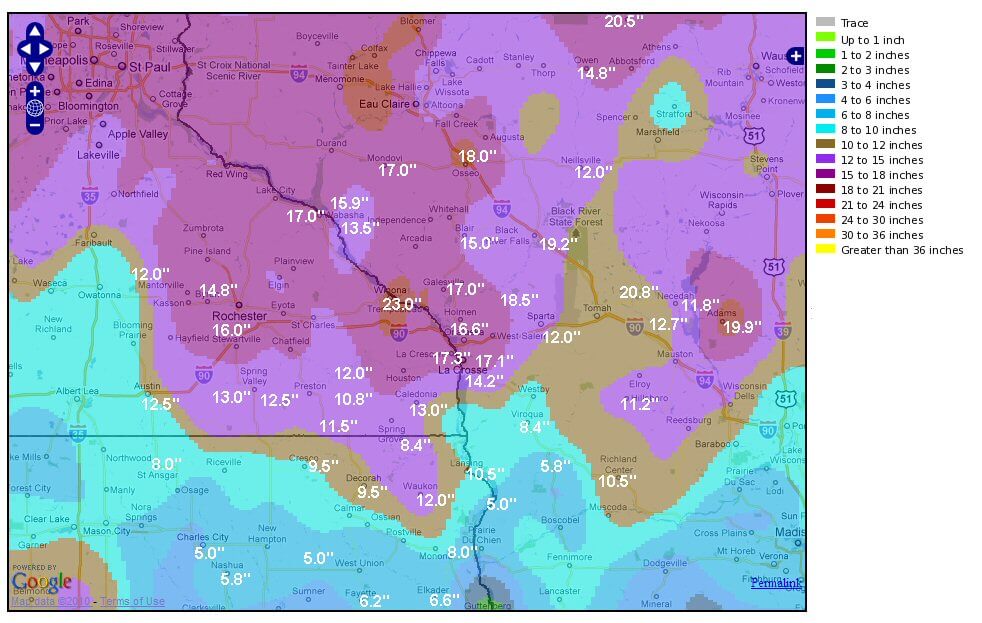 Remember shoveling….digging through a ton of snow 9 years ago??? I do!! A crazy blizzard hit the Midwest December 10-12 back in 2010 that caused many headaches and the Metrodome roof in Minneapolis to collapse! Read all the details from the National Weather Service. -EK

A very potent winter storm developed over South Dakota and Nebraska on Friday, December 10th, then strengthened as it moved into Iowa through Saturday, December 11th. Moisture and warm air surged into the Upper Mississippi River Valley ahead of the system on Friday, which led to temperatures near or above the freezing mark for much of southeast Minnesota, western Wisconsin and northeast Iowa. Precipitation pushed into northeast Iowa, southeast Minnesota and far southwest Wisconsin on Friday evening, continuing to surge northeast through the night. Initially, the precipitation fell as a wintry mix, from rain across the southern parts, to freezing rain and sleet surrounding the Interstate 90 corridor, to snow in areas to the north. Eventually enough cold air wrapped into the system to cause all precipitation to change over to snow. The storm system then moved east Saturday night, causing the snow to come to an end for the local area by Sunday morning, December 12th.

Very heavy snow accompanied this system as amounts ranged from a few inches in the far southern parts of the forecast area (due to much of the precipitation falling as rain), to greater than 20 inches. The highest amounts fell along and north of Interstate 90. The impact of the heavy snow was compounded as strong winds blew at 25 to 35 mph with gusts up wards of 45 mph. This caused significant blowing and drifting snow, as well as white-out conditions across much of the area. Although the snow ended by Sunday morning, the strong winds continued, therefore hazardous conditions remained through the morning hours.

Blizzard and Winter Storm Warnings were in effect for the entire area starting Friday night and continued through Sunday morning.

In addition, a cold arctic airmass was pulled into the area behind the system, with temperatures dropping as the day progressed on Sunday. High temperatures across the forecast area on Sunday ranged from the single digits above zero west of the Mississippi River to the teens above zero east of the river. As winds were still breezy, wind chills dropped to values colder than 20 degrees below zero by Sunday morning. Wind chill advisories were issued for the area after the system had progressed east.

This was the same storm that made the roof of the Metrodome collapse. Because of that the Vikings had to play a home game in Detroit, and another home game at TCF Bank Stadium on the University of Minnesota campus.

VIDEO: A Contractor Destroys a Bathroom Because of a Billing Issue

How to quit in an epic way