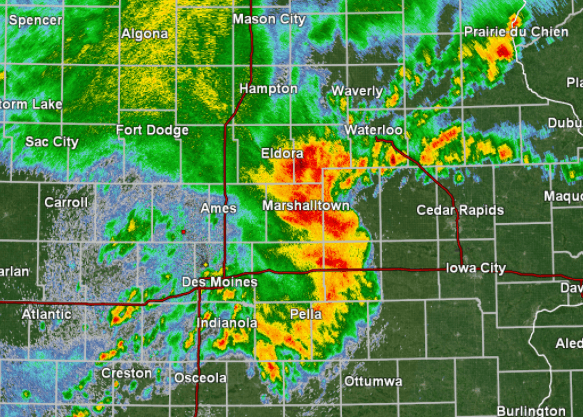 The storm that brought devastating winds to a good portion of Iowa on Monday was actually called a “Derecho”.

“Widespread, destructive straight line winds blew across central Iowa during the day on August 10, 2020. The highest official wind gusts measured was 99 mph at the Marshalltown Airport with an unofficial wind gust of 106 mph at Le Grand (east of Marshalltown). The strongest winds were between the Highway 30 and Interstate 80 corridor (including, but not limited to the Des Moines metro, Ames, Newton, Marshalltown, Tama/Toledo, Carroll) from central Iowa eastward into east central Iowa and northern Illinois.”

“A derecho (pronounced similar to “deh-REY-cho”) is a widespread, long-lived wind storm that is associated with a band of rapidly moving showers or thunderstorms. Although a derecho can produce destruction similar to the strength of tornadoes, the damage typically is directed in one direction along a relatively straight swath. As a result, the term “straight-line wind damage” sometimes is used to describe derecho damage. By definition, if the wind damage swath extends more than 240 miles (about 400 kilometers) and includes wind gusts of at least 58 mph (93 km/h) or greater along most of its length, then the event may be classified as a derecho.” 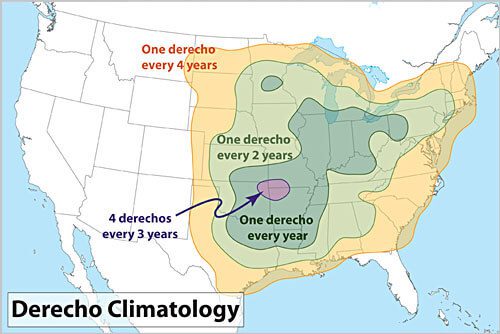 “Derechos in the United States most commonly occur along two axes. One extends along the “Corn Belt” from the upper Mississippi Valley southeast into the Ohio Valley, and the other from the southern Plains northeast into the mid Mississippi Valley. During the cool season (September through April), derechos are relatively infrequent but are most likely to occur from east Texas into the southeastern states. Although derechos are extremely rare west of the Great Plains, isolated derechos have occurred over interior portions of the western United States, especially during spring and early summer.”