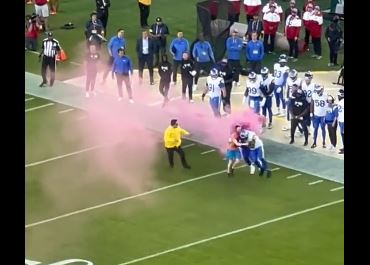 With seconds remaining in the first half of last night’s “Monday Night Football”, a man ran onto the field at Levi’s Stadium carrying a pink smoke flare. As yellow-clad security staffers struggled to keep up, a pair of Rams defenders saw their opportunity. When the protestor ran on the sideline in front of the Rams bench, defensive end Takkarist McKinley chased the protestor directly into the path of All-Pro linebacker Bobby Wagner, who trucked him into the turf.

OMG BOBBY WAGNER JUST TRUCKED THE FAN THAT RAN ON THE FIELD pic.twitter.com/uwoEzkrFxc