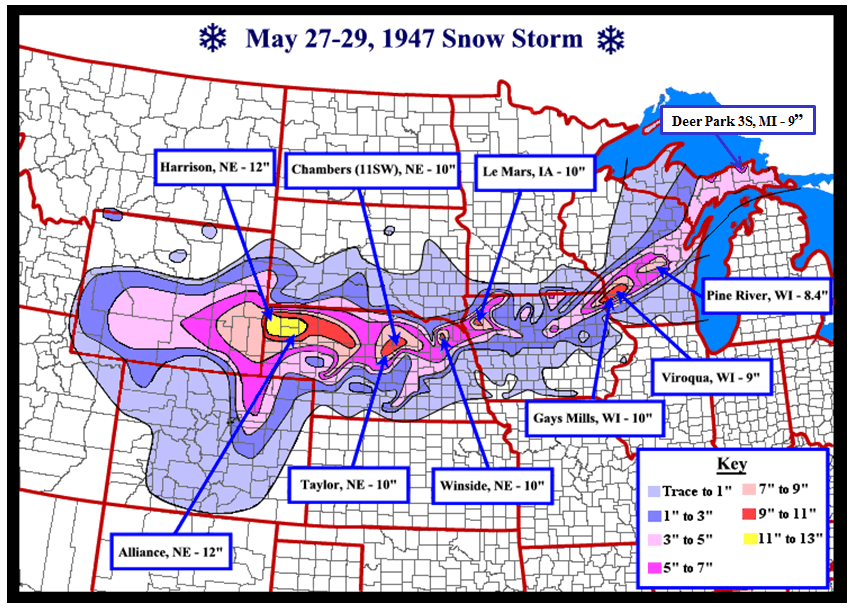 The last couple days have been warm and sticky, but today and weekend are looking cooler and less muggy.  It neither pleasant, or muggy 73 years ago.  The National Weather Service from La Crosse remembers the forgotten snow storm of May 27-29, 1947.

“On the morning of May 27, 1947, a developing low pressure system was located over central Nevada. It was this low which would be responsible for the snow storm over the Central Plains, Upper Mississippi Valley, and Upper Michigan from May 27th through May 29th. A strong arctic high pressure system was located over the Mackenzie Basin in northwest Canada. This high would provide the cold air needed for a winter storm to develop. A mixture of rain and snow developed over Colorado and Wyoming during the day on May 27th and changed to all snow during the night as the low deepened and moved slowly east through southern Colorado.

On the morning of the 28th, the high pressure center had moved rapidly south to southern Saskatchewan. This high pressure area brought unprecedented cold for late May to North Dakota. Temperatures fell to as low as 15 degrees at Eckman, which is located near the Canadian border. In addition, the mercury fell to 23 degrees at Bismarck which is the lowest ever recorded there after May 20th. Meanwhile, below freezing temperatures were found across Montana, Wyoming, northeastern Colorado, western Nebraska, northern Minnesota, and western South Dakota. The sub freezing temperatures caused a partial to total loss of fruits and tender plants. During the day, this cold air surged southward across eastern Nebraska, eastern South Dakota, Iowa, southern Minnesota, and Wisconsin. Many cold maximum temperatures were established across the region for the day.

At the same time this was occurring, the area of low pressure was continuing to strengthen as it moved east through southern Kansas. From the evening of the 27th through the 28th, this low produced a 6-12″ snow band from southeast Wyoming east across northern Nebraska into northwest Iowa. The heaviest snow in this band was found in Alliance and Harrison, Nebraska where 12″ had fallen. The weight from the heavy wet snow caused considerable damage to power lines, telephone lines, telegraph lines, trees, and shrubs.

During the late afternoon and evening of May 28th, the surface low began to move northeast across northern Missouri, northwest Illinois, and southeast Wisconsin. The reason for this change in direction was due to a strong upper level disturbance that had dropped into the base of the upper level trough over Nebraska during the day. This upper level disturbance caused an amplification of the upper level ridge over the Ohio Valley and much of New England. As a result, temperatures in this region climbed into the 80s instead of the 50s and 60s which were seen the day before. However on the cold side of the system, temperatures remained in the 30s and 40s in the Upper Mississippi Valley. In addition to the cold temperatures, rain changed to snow across southern Minnesota, northeast Iowa, and across much of Wisconsin. This was the latest snow ever reported in a season in this area, with some places experiencing their biggest May snow storm on record.

From the late afternoon of the 28th into the early morning hours of the 29th, 7-10″ of snow fell across Allamakee County in northeast Iowa, and Vernon, Crawford, southern Monroe, and Richland Counties in southwest Wisconsin. The heaviest snowfall amount was 10″ in Gays Mills, WI. Meanwhile, a 7-9″ band of snow fell across northern Adams, Waushara, Winnebago, Outagamie, and Waupaca Counties in central and east central Wisconsin. The weight of the heavy snow caused severe damage to power lines, telephone lines, bushes, and trees.” 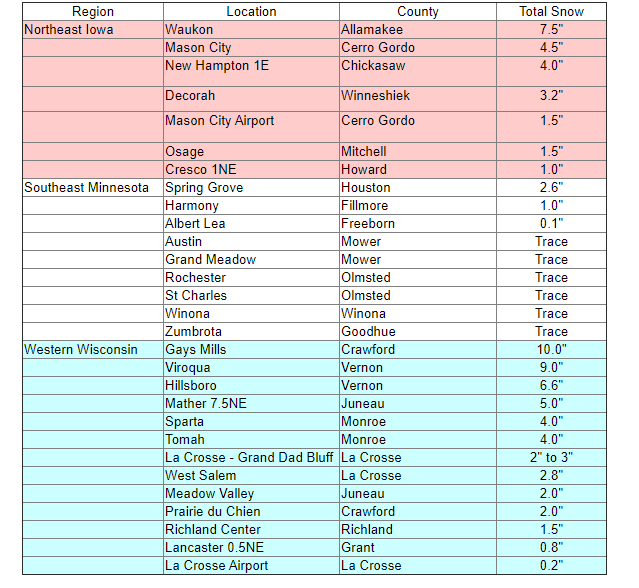