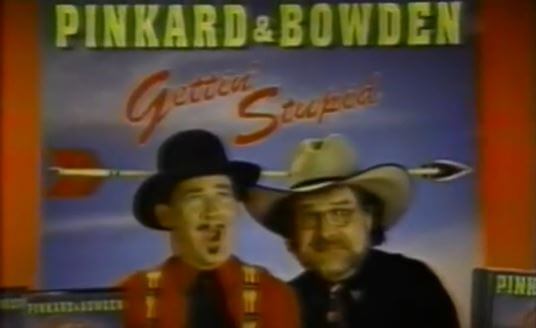 When I was a young kid, I remember seeing a commercial on TV with these guys that dressed funny and sang funny songs.  The guys in the commercial were “Pinkard & Bowden”.  The country comedy duo started out back in 1984, and released a total of four albums.  Pinkard & Bowden were pioneers, they were the first country comedy act to have explicit content warnings on their albums, and the duo was actually banned from appearing on TNN.

Some of their parody favorites:

“Help Me Make Through The Yard”

“She Thinks I Steal Cars”

“I Lobster But Never Flounder”

On a more serious note, the Pinkard part of the duo, James “Sandy” Pinkard was quite the song writer.  Among the songs he penned were”You’re the Reason God Made Oklahoma” by Shelly West and David Frizzell, “Coca Cola Cowboy” by Mel Tillis, and “Blessed Are the Believers” by Anne Murray.