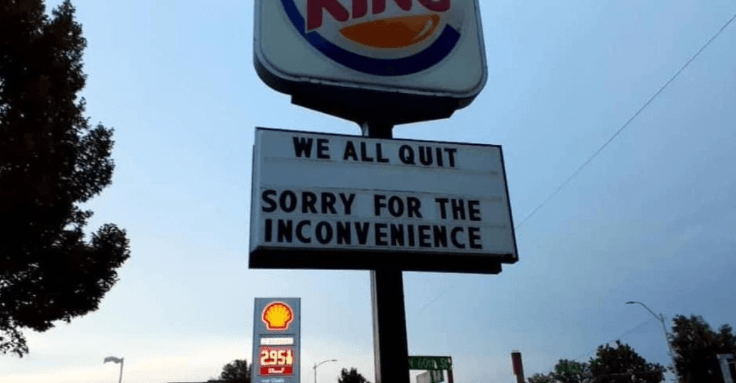 Burger King employees at one restaurant are so done. A Burger King sign in Lincoln, Nebraska, has gone viral, reading, “WE ALL QUIT” and “SORRY FOR THE INCONVENIENCE.” Employees say they’ve been working in the kitchen with no air conditioning for weeks, with the temperature reaching more than 90 degrees at one point. One employee, former general manager Rachael Flores, was reportedly hospitalized for dehydration. Flores put in her two weeks notice this month, saying she’d often worked up to 60 hours per week, and eight of her co-workers followed her lead, complaining the restaurant was understaffed. Burger King hasn’t commented.

“WE ALL QUIT.”
The local Burger King message that was recently taken down is generating a lot of buzz. We spoke with two former employees about the message.https://t.co/JZNIK4mwNS