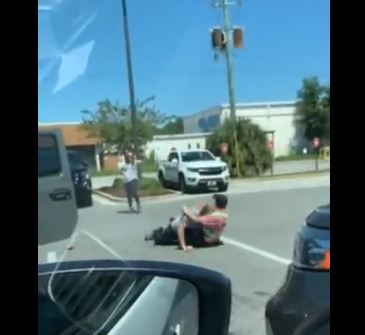 Florida man Mykel Gordon is being praised as a hero after stopping an alleged carjacking in a Chick-fil-A parking lot. The victim, a mother who was getting her baby out of the car at the popular food chain, claims a man with a stick demanded her car keys. The woman began to scream, and Chick-fil-A employee Gordon intervened. Soon after, others assisted Gordon. The Okaloosa County Sheriff’s office has posted video footage of the encounter. Gordon does not appear to be seriously injured, and the suspect was arrested and charged with carjacking with a weapon.

In reference to the FWB Chick-fil-A employee who ran to help a woman with a baby who was being carjacked, we want to say a sincere thank you to Ms. Kelner for providing video of a portion of the encounter. (see prior post). A major shout-out to this young man for his courage! pic.twitter.com/2Lcwe46azv