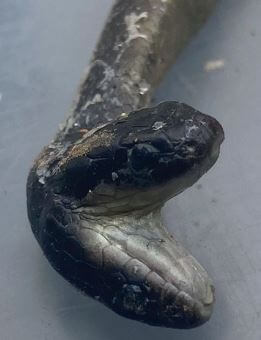 A snake catcher in Australia got a lot more than he bargained for when he was called out to relocate a female tiger snake last week.

When Stewy the Snake Catcher opened the bag to let the highly venomous snake out, he discovered that she’d actually given birth to several other snakes.

While it’s common for tiger snakes to give birth to live young, what surprised the snake catcher was that one of the babies had two heads.

A Facebook message posted by Direct Vet Services said that while the two-headed snake was a pretty remarkable find, it actually had to be euthanized.

The message said, “As cool as it was these animals are not generally viable so it was euthanized on humane grounds. Mum and the other kids were checked over and released, slithering off into the distance.”

Sometimes you get more than you bargained for. When Stewy the Snake Catcher.comes in we can be sure he has company….