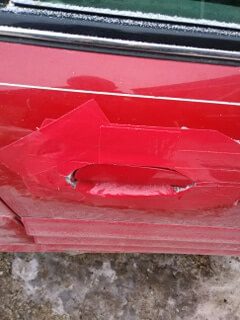 According to a new survey, 51 percent of Americans currently have duct tape holding something together in their house — and 37 percent are using it to patch up something on or in their car.

The survey also found that the average American is using duct tape right now as a temporary fix for seven things in their home — and admit that they will leave duct tape on that thing for eight full days before having it repaired the right way.

I’ve used duct tape to fix numerous things, including the door handle on my Grand Am which I had for many years. I used the standard gray initially, but my cousin in-law Jason put red on their to match the paint finish…Take a look! Duct tape gets it done!!